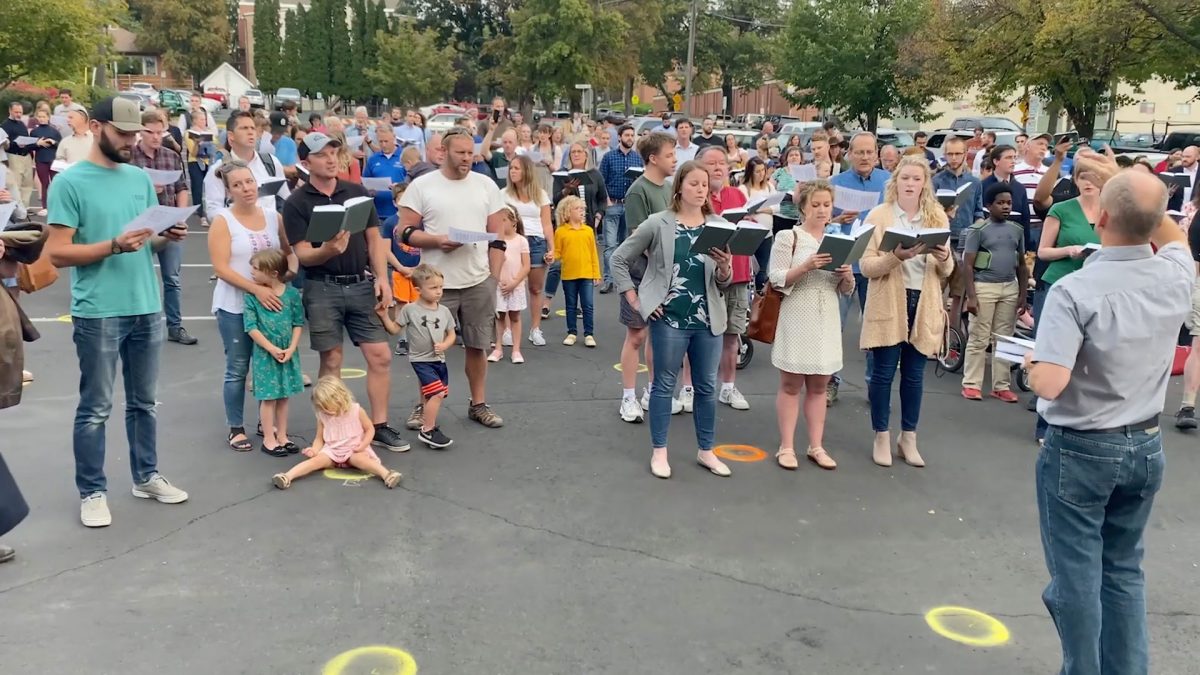 *This article is dedicated to Gabriel Rench, who serves as a member on Right Response Ministries’ Board, and the other courageous members of Christ Church in Moscow, Idaho who were arrested on Wednesday, September 23rd. At Christ Church’s “Psalm Sing” event, held at City Hall in downtown Moscow, members of the congregation were led in singing psalms and hymns in protest of the Mayor’s recent decision to extend the city’s mandatory mask ordinance into January 2021. It is important to note that this same Mayor recently allowed a BLM protest in his town without arresting a single individual. This Mayor has also been recently photographed at social gatherings while disregarding his own edicts (choosing to not social distance and not wear a mask). And in addition to all this, the city of Moscow has not had a single Covid related death. In other words, the Mayor of Moscow is a shining example of an absolute tyrant. Rench was one of three who were arrested for not socially distancing (or wearing masks) during the event. We thank God for the courage and character of men like Gabe Rench who are faithfully leading their families and congregations to worship the Lord with fear in their hearts and joy in their souls. May God raise up more courageous men and women who are willing to do the same.

The Old Testament has become somewhat of an antique in much of Evangelicalism today.  In the most recent installment of Canon Press’s “Sweater Vest Dialogues” series, Pastors Douglas Wilson and James White compared the attitude of many of today’s Evangelicals toward the Old Testament to the attitude one might have toward a dusty portrait of their great-grandmother.  Wilson and White mused that one might show reverence toward the picture, while feeling disconnected or intimidated by it.  While amusing, this analogy is certainly true of the attitude of many in the church towards many Old Testament writings.  We live in a day and age in which both individual believers and pastors alike have shied away from them.  There is certainly a wide spectrum of dispositions towards the Old Testament.  Many neglect the writings, possibly unintentionally, while others, including well-known Christian leaders, have sought to ‘unhitch’ Christ’s sheep from them altogether.

As Christians, we must see the folly in doing this, and learn to love the writings of the Old Testament.  If we fail to do so, we will lose many fundamental truths about God, ourselves, the world He has made, and His plan for redemption.  For example, without the book of Genesis, Christians will lose the foundational understanding that God is eternally self-existent and the Creator of all things.  We will forget that we are dependent upon Him for everything and that we were made in His own image, for His glory.  The book of Genesis also teaches us that maleness and femaleness are not arbitrary social constructs, but the careful and good design of God:

“So God created man in his own image, in the image of God he created him; male and female he created them” (Genesis 1:27).

We would also forget that we sinned against God and so plunged ourselves and all our posterity into sin.  And it is here that we see the first revealing of God’s promise of reconciliation:

But I must go further.  Without the books of the Law, we would have no notion of God’s holiness or the notion of proper justice.  In a world that longs for justice, the wisdom of God’s law, rightly applied with God’s gospel, is sorely needed.  Without the Proverbs, we would lack wise insight and instruction about God’s world to teach ourselves and our children about.  Without the Prophets, we would fail to see God’s promises fulfilled in Christ and His faithfulness to His covenant people.  Surely, there is much at stake when we neglect or even reject the Old Testament writings.

But what about the Psalms?  The Psalms have, for many, become a helpful spring by which personal devotions are fed; many can be found documented in carefully curated Instagram posts.  While it is true that many of the Psalms are incredibly encouraging to our weary souls (Psalms 23, 42-43, 91), is this really the only purpose for the Psalter?  Other Psalms, known as “Imprecatory Psalms,” call upon God to cast down judgment on His enemies.  Do these Psalms hold any place in Christian life and worship today? Simply put, they must.

In his Epistle to the Ephesians, the Apostle Paul commands the believers in that church to “address one another in psalms and hymns and spiritual songs, singing and making melody to the Lord with [their] heart” (Ephesians 5:19 ESV).  There can be no doubt that in this section of the Epistle, corporate singing in worship is prescribed to the church by God as an essential element of its worship.  And this verse shows us that it is “psalms and hymns and spiritual songs” that are to be sung.  We also see this modeled by one of Judah’s righteous kings, Hezekiah as he made kingdom reforms and consecrated the nation to the Lord.  It is the Psalter that is clearly in view as the substance and content of Judah’s worship:

“When the offering was finished, the king and all who were present with him bowed themselves and worshiped. And Hezekiah the king and the officials commanded the Levites to sing praises to the Lord with the words of David and of Asaph the seer. And they sang praises with gladness, and they bowed down and worshiped” (2 Chronicles 29:29-30 ESV).

Churches today that desire to glorify God and obey His Word must preach, pray, and sing the Psalms.  When we give consideration to particularly singing the Psalms, we must recognize that Christ himself is leading us in worship.  The Psalms are the songs of King Jesus.  In his book War Hymns of the Prince of Peace, James Adams provides convincing argumentation that the Psalms are the very words, prayers, and songs of Christ.  Adams provides a surprisingly long list of evidence that proves a number of the Psalms are referenced in the New Testament Scriptures.  Not only are they referenced, or find their fulfillment there, but a number of these references are attributed to Christ Himself.  Consider what is said by the author to the Hebrews:

“Consequently, when Christ came into the world, he said, ‘Sacrifices and offerings you have not desired, but a body have you prepared for me; in burnt offerings and sin offerings you have taken no pleasure. Then I said, ‘Behold, I have come to do your will, O God, as it is written of me in the scroll of the book’” (Hebrew 10:5-7 ESV).

These words are taken from Psalm 40:6-8, and the book of Hebrews makes clear that these words have not only been fulfilled in Christ but also spoken by Him.  There is a similar example found in Hebrews 2:11-12 and Psalm 22:22.  Adams also bolsters his argument by proving that two of the most famous imprecatory Psalms, Psalms 69 and 109, among others, “have been historically understood as being the voice of Christ” and finding their fulfillment during His earthly ministry.  Surely each Psalm has the occasion for which it was written- whether by David, Asaph, Solomon, or Moses, but these were the words of Christ Himself, leading His covenant people in worship and in warfare.

This is such an important point in our day: worship is warfare. When we sing the Psalms in corporate worship, the songs of our King Jesus, He leads us in worship of the Triune God.  Christ leads us in praise to God for His just judgments (Psalm 105:5), He leads us to ask for mercy in forgiveness from our sin (Psalm 51:1-2), He even leads us to pray for God’s judgment upon His enemies (Psalm 3:7).  The Psalms, being the very words of Christ Himself, teach us to pray in Christ’s name for God’s glory to be extended to all the nations of the earth (Psalm 22:27-28).  As we sing the Psalms, we are trained to forsake our own wishes and desires and to sing songs that are oriented to God, His glory, and His victory over all darkness.  On that note, we learn by singing the Psalms that Christians are never to pray, preach, or sing the Psalms from a position of personal animus towards their own enemies or rivals.  Instead, the Psalms promise that God will execute swift justice on His enemies if He chooses to refrain from saving them.  In our church’s weekly worship, we have made it a point to incorporate classic Psalms, as well as modern renditions arranged by various Christian artists (Shane & Shane, My Soul Among Lions, Keith & Kristyn Getty, etc).  This decision has richly blessed our worship, and so I encourage you to also consider including these and/or other Psalms in your corporate and family worship on the Lord’s Day.

In conclusion, I want to provide a quote from R.L. Dabney’s The Christian’s Duty Towards His Enemies (found in the Appendices of Adams’ book).  Writing in the 19th century, Dabney wrote:

“The embarrassment is increased by the current opinion that there is inconsistency between the teachings and examples of the Old Testament and the New upon this subject…They thereupon imagine a discrepancy, if not a contradiction, between them, and adopt the mischievous conclusion that the two Testaments contain different codes of Christian ethics.  This notion, it is to be feared, has a general prevalency.  What is more common than to hear Christians, who should be well informed, and who profess full reverence for the inspiration of the whole Scripture, speak of the morality of the Old Testament, of the Hebrew saint, of the prophet, as harsh, austere, and forbidding, while that of the New Testament, of Jesus, and of the Christian is sweet and forgiving?”

Dabney’s assessment of the spiritual climate of Evangelicalism in his day is likely far more true in our day. As it pertains to the Psalms, many moderns, including pastors and theologians, read the Psalms with embarrassment.  They have no concept of Christ’s war against His enemies.  However, we must never forget that this Jesus “is the same yesterday and today and forever,” and He has promised to lead His people in triumphant war against His enemies (Hebrews 13:8 ESV).  “For though we walk in the flesh, we are not waging war according to the flesh. For the weapons of our warfare are not of the flesh but have divine power to destroy strongholds” (2 Corinthians 10:3-4 ESV).  Jesus Christ presides over the worship of His Church.  This means that Jesus presides over our preaching, our prayers, and our singing of “psalms, hymns, and spiritual songs.”  Each Lord’s Day, Christ leads us into battle as we seek to “destroy strongholds” and “fight the good fight” against the spiritual forces of darkness.  Therefore, let us incorporate the Psalter into our weekly worship, not with embarrassment for our Christian Heritage but with a profound sense of holy pride.  Let us rejoice in the privilege of singing the songs of our King.