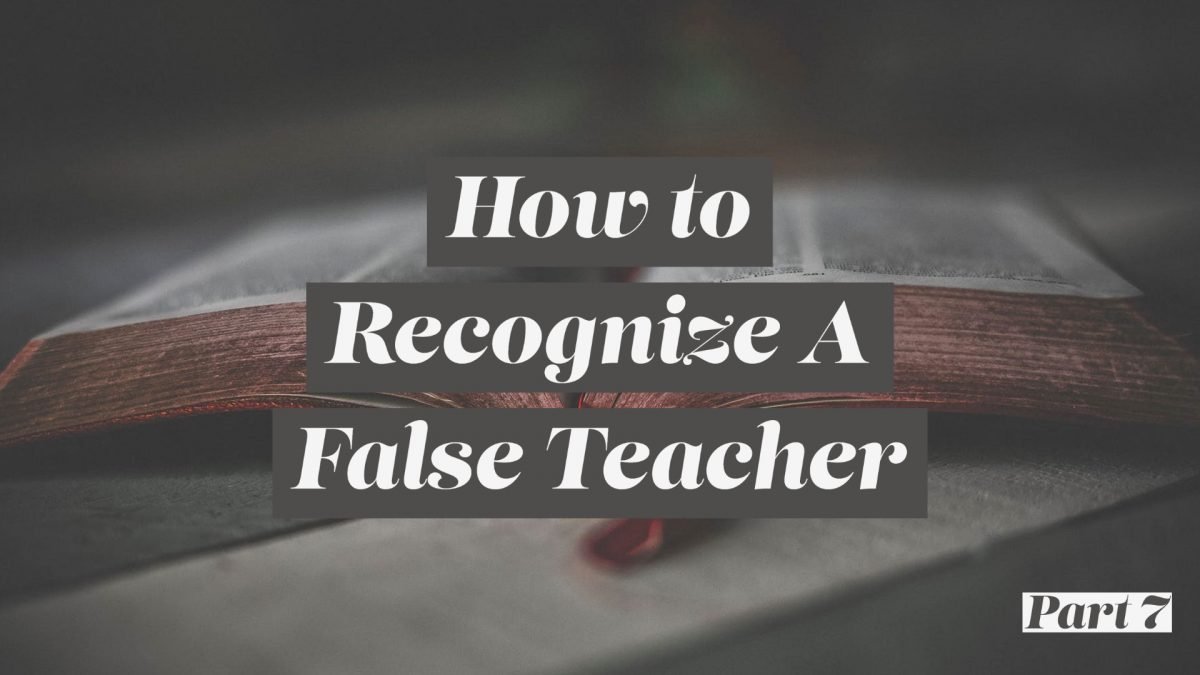 18 Children, it is the last hour, and as you have heard that antichrist is coming, so now many antichrists have come. Therefore we know that it is the last hour. 19 They went out from us, but they were not of us; for if they had been of us, they would have continued with us. But they went out, that it might become plain that they all are not of us. 20 But you have been anointed by the Holy One, and you all have knowledge. 21 I write to you, not because you do not know the truth, but because you know it, and because no lie is of the truth. 22 Who is the liar but he who denies that Jesus is the Christ? This is the antichrist, he who denies the Father and the Son. 23 No one who denies the Son has the Father. Whoever confesses the Son has the Father also.

By this point in our text, John has already revealed glimpses of his moral test of obedience to God’s commandments (2:3-6) and his relational test of love for God and fellow believers (2:7-11). Now the Apostle John provides us with the doctrinal test of truth (2:18-27). This doctrinal test falls into three sections. In verses 18-20, John shows that to avoid spiritual deception, we must develop discernment with regard to people. In verses 21-23, he shows that we must develop discernment with regard to doctrine, especially primary doctrine regarding the person and work of Jesus Christ. And in verses 24-27, John shows that the means of developing such discernment is to abide in the Word and the Spirit. For the purpose of this particular lesson we will focus our attention on the first two sections: 1) Discernment of people, and 2) Discernment of doctrine. According to John, in order for us to avoid being deceived, we must exercise discernment in regards to both people and doctrine.

“In order for us to avoid being deceived, we must exercise discernment in regards to both people and doctrine.”

THE STRATEGY OF FALSE TEACHERS

In verse 18 of our text, John says, “that antichrist is coming,” and that even now “many antichrists have come.” When John says, “even now many antichrists have come,” he means that the evil spirit that will characterize the “final antichrist” is already working in these false teachers who have left the churches. The prefix, “anti,” means both “instead of” and “in opposition to.” False teachers are almost always subtle at first. They are forced to be initially subtle because they typically rise up from within the church. Therefore, false teachers do not begin by making bold claims against Christ. Rather, false teachers almost always start out by simply pushing an agenda that subtly presents something “instead of” Jesus. False teachers will almost always use the name of Jesus, but the “Jesus” being presented will not be the same Jesus that is presented in the Scripture. If a person chooses to take the bait, they will be led further and further away from the biblical Jesus until finally their heart is clearly “in opposition to” the Jesus of the Bible.

“False teachers are almost always subtle at first. They are forced to be initially subtle because they typically rise up from within the church.”

Briefly looking ahead, we see John saying this in verse 20 of our text: “But you have been anointed by the Holy One, and you all have knowledge.” John is telling his readers that spiritual knowledge is not restricted to some elite inner circle. Rather, they all know the truth of the gospel because they all have the anointing from the Holy One, which refers to the indwelling ministry of the Holy Spirit. The false teachers of John's day were likely using the word “anointing” as a technical term for being initiated into their special gnosis (secret knowledge). However, John takes their term and uses to speak of the Holy Spirit. At the moment of the new birth, the Holy Spirit opens our blind eyes to see the truth about our sinfulness and the all-sufficiency of what Christ did on the cross to pay for our sins. This gospel message is what these believers had heard from the beginning (1 John 2:24). Rather than moving on from it to some “new truth,” they needed to abide in the old gospel truth that they had believed from the start.

THE MARK OF FALSE TEACHERS

Now we are ready to go back and focus on verse 19 of our text, which says, “They went out from us, but they were not of us; for if they had been of us, they would have continued with us. But they went out, that it might become plain that they all are not of us.” These false teachers, whom the Apostle John labels as antichrists and liars, did not wear red suits with horns and a tail. Many of them actually arose from within the churches. Some of them may have even been elders or pastors, who for a while had taught the truth. The Apostle Paul warned the Ephesian elders of this danger by saying, “From among your own selves men will arise, speaking perverse things, to draw away the disciples after them” (Acts 20:30).

“False teachers don't wear red suits with horns and a tail. Many of them actually arise from within the church.”

As an important disclaimer, please understand this: John’s words here do not apply to people who get disgruntled in one biblical church and leave to join another biblical church. While this practice is usually regrettable, and certainly not ideal, it is wrong to label those who choose to leave a particular local church as heretics if they have not clearly abandoned core Christian truths. Sometimes genuine Christians have to agree to disagree on secondary and tertiary doctrines, and simply choose to work in separate portions of the Lord’s vineyard, as in the case of Paul and Barnabas (Acts 15:36-41).

Finally, in verse 23 of our text, John says, “Whoever denies the Son does not have the Father; the one who confesses the Son has the Father.” He goes on to say in verse 25 that all of this concerns God’s promise to us about eternal life. If we deny the truth about God’s Son as revealed by the apostles in the New Testament, we do not have the Father and we do not have eternal life. John's point is that if a person chooses to deny cardinal truth about Jesus Christ and yet claims to know God, they are deceiving themselves. Sound doctrine necessarily goes along with a genuine personal relationship with God. A person cannot possess genuine intimacy with Jesus without striving to actually know Jesus from the Scripture.

“Sound doctrine necessarily goes along with a genuine personal relationship with God.”

Allow me to offer one final disclaimer on this lesson: None of this is meant to say that a new believer must be able to perfectly articulate precisely correct theological statements about the Trinity or the two natures of Christ in order to be truly saved. However, this is to say that if someone makes heretical statements about Christ and is not open to correction, their salvation should be suspect.

We live in a day when the whole idea of discernment is minimized because truth is minimized. The reigning mantra is: “Doctrine divides.” The implication is that each of us should set aside our doctrinal views and accept anyone who says that they believe in Jesus. Tolerance, unity, and love are viewed as much more important than doctrinal truth. However, take note that John, who was known as “the apostle of love,” now calls these false teachers “antichrists” and “liars.” He does not refer to them as brothers in Christ, who simply hold a different view. True biblical love must never be divorced from an unwavering commitment to biblical truth.

1) Have you developed an aversion towards doctrine? Do you see a love for doctrine as merely divisive?

2) The concept of truth and the concept of unity often seem to be at odds with one another. How do you determine which of these should be prioritized in each specific case?