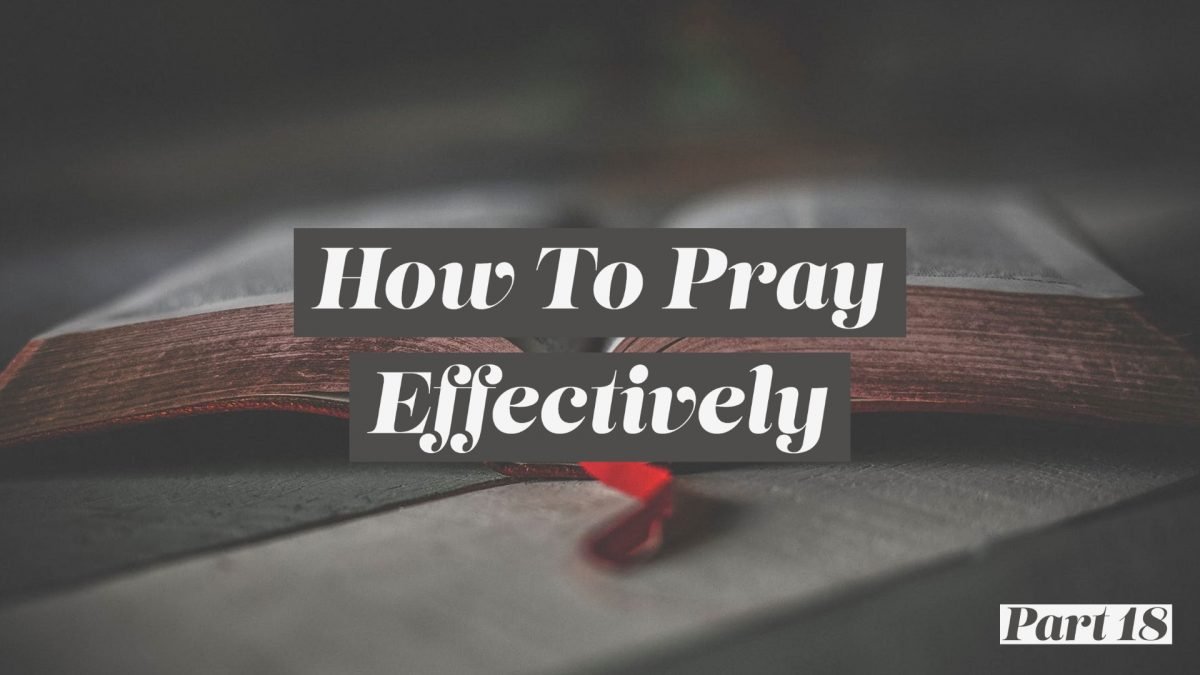 14 And this is the confidence that we have toward him, that if we ask anything according to his will he hears us. 15 And if we know that he hears us in whatever we ask, we know that we have the requests that we have asked of him. 16 If anyone sees his brother committing a sin not leading to death, he shall ask, and God will give him life—to those who commit sins that do not lead to death. There is sin that leads to death; I do not say that one should pray for that. 17 All wrongdoing is sin, but there is sin that does not lead to death.

John specifically wrote these verses to encourage us to pray. His desire is to convince us that our God is a prayer-hearing God (Psalm 65:2). John is echoing the repeated promises that Jesus made to his disciples in the upper room right before his arrest (Mark 11:22-24, John 14:13-14). Jesus promised that if we ask anything accordance with the will of God, he will answer favorably. This portion of our text falls neatly into two parts: 1) John states the general principle, which has both a promise and a condition (verses 14-15). 2) John provides a specific example of how we should apply this principle (verses 16-17).

“Jesus promised that if we ask anything accordance with the will of God, he will answer favorably.”

THE PRINCIPLE OF PRAYER

In verse 14 of our text, we are told “that if we ask anything according to [God's] will he hears us.” Biblical prayer is submitting our will to God's will. It is praying, as Jesus instructed us to pray in Matthew 6:10, “Thy will be done, on earth as it is in heaven.” However, what makes this exceedingly difficult is the fact that the Scripture clearly teaches that God possesses two wills: 1) God's Will of Decree (sovereign will) and 2) God's Will of Desire (moral will). God’s will of decree is all that which God has determined to do from eternity past. In this sense, God “works all things after the counsel of his will [of decree]” (Ephesians 1:11). Everything that happens in this world takes place because God decreed it. If anything could happen outside of God's will of decree, then he would not be truly sovereign over all things as the Scripture clearly teaches (Isaiah 46:9-11).

“Everything that happens in this world takes place because God decreed it.”

God’s will of desire, however, is distinct from his will of decree. For example, God does not in any sense desire that men should sin, and yet we know that God decreed the fall of mankind in the garden of Eden. However, although God decreed (or ordained) these events, he did not cause Adam and Eve to sin, neither was he responsible for their sinful actions. Men commit sin because of their own evil desires and God takes no delight in their sin (James 1:13-15). In light of all this, while God promises to grant our requests when we ask in accordance with his will, we must recognize that there are often exceptions to this rule. God’s will is that his kingdom would come here on earth as it is in heaven, and yet the outworking of his will involves thousands of years and seemingly millions of setbacks.

A DIFFICULT EXAMPLE OF PRAYER

Verses 16-17 set up a significant interpretive dilemma: “If anyone sees his brother committing a sin not leading to death, he shall ask, and God will give him life - to those who commit sins that do not lead to death. There is sin that leads to death; I do not say that one should pray for that. All wrongdoing is sin, but there is sin that does not lead to death.” If this person is truly a brother, then why does he need life? Believers already have new life from God. This dilemma has led theologians into two primary camps. Some say that John is using the word 'brother' loosely, to refer to a professing Christian, who is not truly saved. They interpret the word 'life' to mean salvation. However, others say that the word 'brother' means a true Christian, and thus they interpret the word 'life' to mean preservation of physical life. In verse 17 of our text, John makes it clear that while all unrighteousness is sin, some sins lead to death, whereas other sins do not. Notice that John does not forbid us from praying for someone who is committing sin leading to death, but he does not extend the promise that God will grant life to such a person.

“John does not forbid us from praying for someone who is committing sin leading to death, but he does not extend the promise that God will grant life to such a person.”

So what is the sin leading to death? There are several views on this particular point, but it is doubtful as to which one is correct. Some believe that John is referencing the same thing that the Apostle Paul referenced when he said that some people died because they were partaking of the Lord’s Supper in an unworthy manner (1 Corinthians 11:30). Others believe this refers to individuals who willfully choose to “lie to the Holy Spirit,” such as Ananias and Sapphira (Acts 5:1-11). Still others believe that this particular sin refers to “the blasphemy of the Holy Spirit,” which is often defined as a continual and willful rejection of Christ, as well as the attributing the Holy Spirit's works to the work of Satan (Matthew 12:31-32). If this is the case, then the sin that leads to death is a sin that can only be committed by an unbeliever. To be honest, I am personally unsure of which view is correct. However, it is clearly wise for Christians to earnestly avoid all of these things.

In verse 15 of our text, John reveals something remarkable. John tells us that we can know that we presently have whatever we have asked for in accordance with God's will. We may not actually see these answers to our prayers come to pass for many years, but we can have confidence that it is as good as done. There is much in Scripture about waiting on God. Sometimes in God's purpose and wisdom, he chooses to delay the answers to our prayers for many years, or even generations. None the less, John comforts us by saying that God has already granted these requests. Therefore, we should continue praying until the request actually comes to pass (Luke 18:1-8), but we should also possess a sense of confidence and peace that we already have whatever we have asked for.

1) What specific request have you prayed for the most over the course of your life? Was this request aligned with God's moral will? Explain.

2) What are some reasons why God would choose not to answer a specific prayer request (in his sovereign will), even though the prayer request aligned with God's moral will?