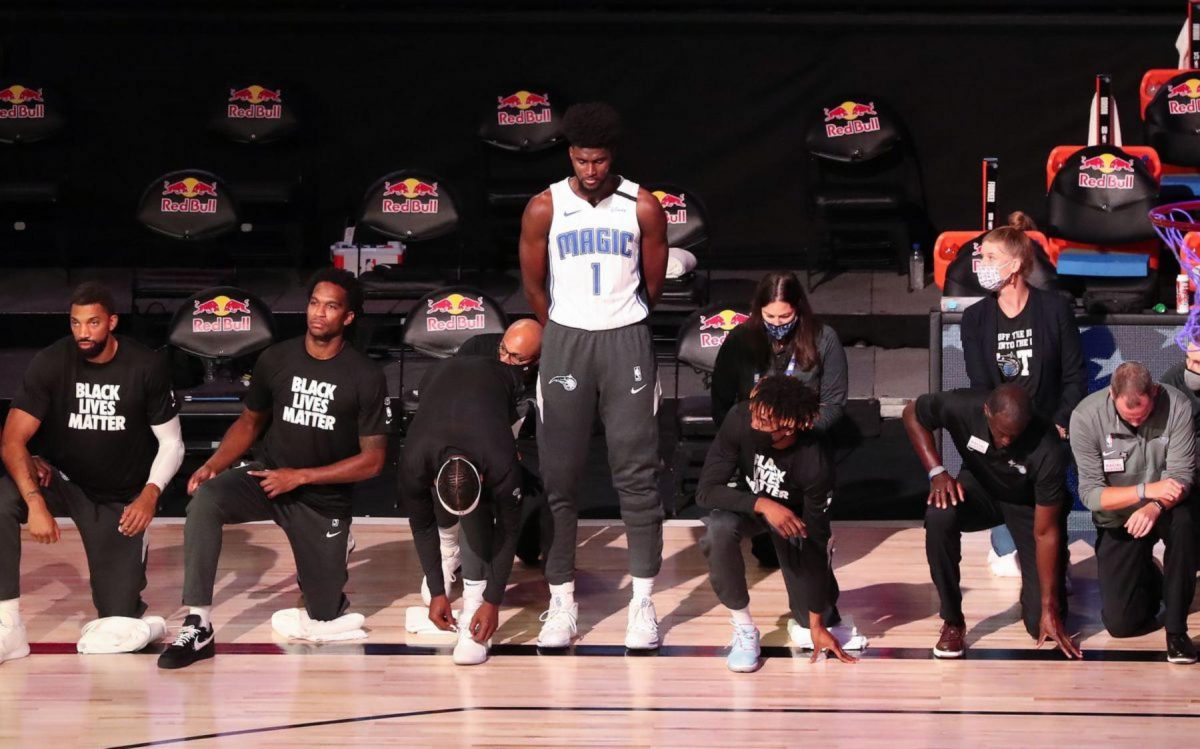 My wife isn’t much of a sports fan, so I was surprised to hear her bring up a professional basketball player over dinner a little over a week ago.  I had just come home from a long shift at work and we had started eating when we began talking about Jonathan Isaac, an NBA forward for the Orlando Magic.  On this particular night, the majority of teams in the NBA had begun playing their first games in the long-awaited reboot of the season following the COVID-19 hiatus.  After months of waiting, basketball was back, but the aura surrounding this season was unmistakably different.

Following the events and aftermath surrounding the death of George Floyd, many of the major sports leagues made decisions to send social justice messages to their viewers.  Major League Baseball’s Opening Day games featured a black “BLM” underneath its trademark logo on the pitcher’s mound.  Many players in these games were also noted to kneel during the playing of the National Anthem.  Multiple institutions in the NCAA’s Division I sports realm saw increased news coverage for supposed incidents of systemic racism (ex: Oklahoma State University, Texas Christian University, etc.).  In particular, the NBA had made the decision to finish out its season in Orlando at Disney World.  The league painted a large “Black Lives Matter” on the top of its basketball courts and allowed players to have “social justice messages” on the backs of jerseys.  And as the majority of teams renewed play on this opening night, many players, coaches, officials and others made the decision to kneel during the National Anthem while wearing black shirts emblazoned with the phrase “Black Lives Matter”.

As the Orlando Magic were set to play their first game against the Brooklyn Nets, Jonathan Isaac remained standing during the playing of the National Anthem.  In contrast to many of his teammates and NBA counterparts, Isaac wore his Orlando jersey, which contained no social justice message.  Isaac was not the only member of the NBA community who stood during the National Anthem, as other notables included Greg Poppovich and Becky Hammon of the San Antonio Spurs and Meyers Leonard of the Miami Heat, but at least two things are notable here.  The first is how much more widespread the social justice movement has become in our day, even amidst those in the world of sports.  It was only a few years ago when Colin Kaepernick and teammate Eric Reid knelt before their games as members of the San Francisco 49ers.  At that time, they were a clear minority against a majority of players who stood.  These days, the opposite is true: Isaac and those who stood represented the obvious minority.

The second is even more important.  Isaac was the only member of this minority group who defended his actions by bearing witness to the gospel of Jesus Christ.  As my wife and I listened to the post-game press conference, we heard Isaac share his hope in Christ and prescribe His gospel as the only answer to society’s ills.  Isaac explained that he didn’t believe that wearing a BLM shirt or kneeling during the National Anthem would “go hand in hand with supporting black lives” and that ultimately the lives of all people are supported in the God who made us.  He also proclaimed Christ in the face of what I thought was one of the most significant questions of the evening, asked by Taylor Rooks, the interviewing journalist- “Can you explain what religion has to do with kneeling for the anthem to protest against racism and police brutality?”

In my assessment, the question highlighted one of the most fundamental issues we are facing today as Christians and as citizens in God’s World.  We live in a world that is increasingly seeing Christianity as having no real voice or place in major national or global issues.  This is partially due to the fact that the secular humanist worldview has gained some ground in the last few years and has become more visibly hostile to the Christian worldview.  But much of this is due to the fact that many Christians (including Christian leaders) have abdicated or forfeited their place to address such issues from the faithful standard of God’s Word.  In response to the question, Isaac faithfully explained the gospel of Christ and how we ultimately need to be forgiven by God for our sins, who is faithful and just to do so if we would but humble ourselves, repent, and seek him in faith.  Isaac exhibited obedience to God’s Word in 1 Peter 3:15- “but in your hearts honor Christ the Lord as holy, always being prepared to make a defense to anyone who asks you for a reason for the hope that is in you; yet do it with gentleness and respect.”

Christian, now is the time to take a stand.  Why, may you ask, is the fight against the “Black Lives Matter” movement so significant?  The movement itself is rooted in the ideologies of critical race theory and intersectionality- Marxist and godless ideologies which seek to pervert God’s justice and free grace in the gospel of Christ.  A quick perusal of Black Lives Matter’s website reveals the organization’s beliefs and doctrinal statement.  According to its confession of faith, Black Lives Matter seeks to destroy the traditional, biblical roles of men and women and the value of the family structure.  The movement asserts that peace and justice can be found apart from reconciliation with God through Christ Jesus.  The document also asserts that the movement is “guided by the fact that all Black lives matter”, but is silent on the injustice of abortion, which has killed millions of unborn black lives in the womb to this point.  And as many Christian leaders have grown silent or taught their people to be complicit with the demands of the movement, it should be no surprise to us that the gospel of Christ is so easily dismissed. In other words, come back when you’re wearing a BLM shirt.  Save your religion for church (if only churches were actually gathering together).

When we take stands, making clear delineations from the Word of God in opposition to the sins and false ideologies of our day, we can expect to face opposition.  We must not forget Christ’s words- “Blessed are you when others revile you and persecute you and utter all kinds of evil against you falsely on my account. Rejoice and be glad, for your reward is great in heaven, for so they persecuted the prophets who were before you” (Matthew 5:11-12 ESV).  Christ has prepared us that we will most surely face false accusations and be persecuted for the sake of His name.  What are we to do when we face such opposition?  We are commanded to rejoice.  The faithful prophets of old were opposed in the same way but stood clothed in the righteousness of Christ.  So too, great will be our reward in heaven.

Praise God for Jonathan Isaac and his faithful proclamation.  Brothers and sisters, this is love for Christ.  May we pray that the Lord raises up other fearless Christians to take stands for His glory in the places that matter most- the workplace, the public square, the basketball court, and the pulpit.  And may we rightly respond to God’s work of redemption with love for Him in the same way- by standing firmly on what He has said in His Word and applying His truth rightly in the world that He has made for His glory and for our good.

“You therefore, beloved, knowing this beforehand, take care that you are not carried away with the error of lawless people and lose your own stability. But grow in the grace and knowledge of our Lord and Savior Jesus Christ. To him be the glory both now and to the day of eternity. Amen.”